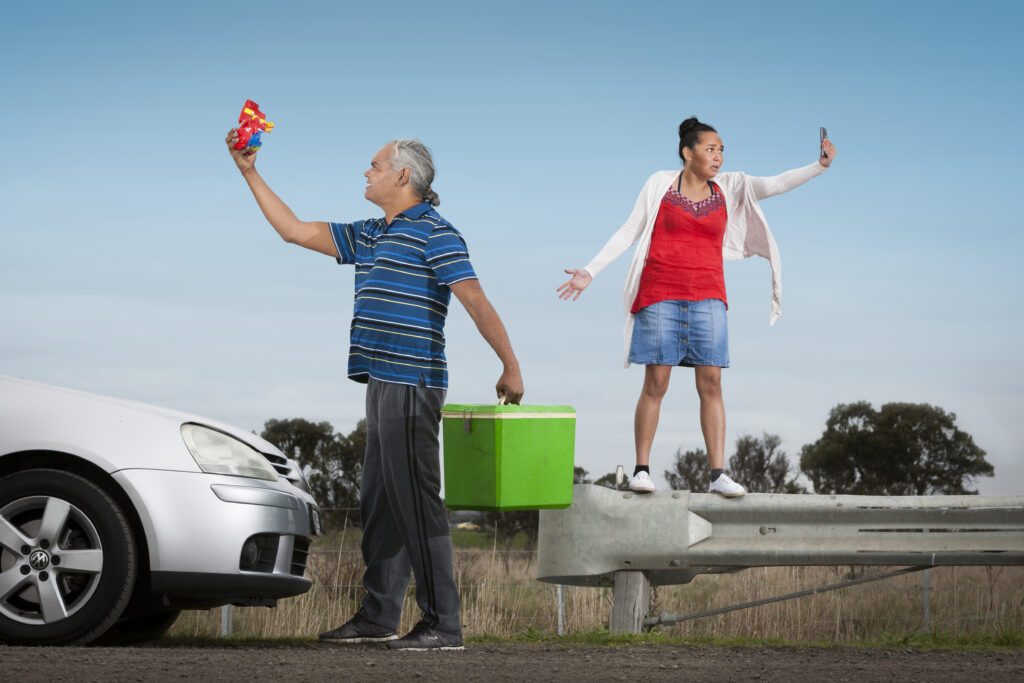 Gasworks Arts Park and ILBIJERRI Theatre Company present WHICH WAY HOME – the heartwarming dramedy of an Aboriginal girl, her much loved ageing dad and their road trip to his birthplace. It’s his return home to country, where the sky is higher and the world goes on forever. Which Way Home will be at Gasworks in Albert Park for two performances, June 19 & 20 before continuing on a national tour.

Tash and her dad journey from Ipswich (Yuggerah Country) to Goodooga (Muriwarri Country) learning new things about each other along the way. They experience moments of hilarity and annoyance as the trivial become exaggerated within the four doors of a car.

WHICH WAY HOME draws on writer Katie Beckett’s personal memories of growing up with her single Aboriginal father. Her mother died when she just 5 years old, leaving her dad to raise 3 children. He also lost his sister, grandmother and mum all within the space of a month.

“The reason I wrote Which Way Home was because I love my dad. That’s it. It’s truly that simple. I’m daddy’s baby pie. (He still calls me that by the way and I’m 34 years old).

It wasn’t an easy time but he did it. He is a loving, wonderful, strong man. I have had a lot of wonderfully strong and emotionally in tune, generous men around me growing up and I was wondering why don’t I see the Aboriginal men that I grew up with represented on stage, on TV, on film? “said Katie Beckett, who is a previous recipient of The Balnaves Foundation Indigenous Playwright’s Award.

Directed by Rachael Maza, actor and writer Katie Beckett plays Tash and her Dad is played by Kamahi King.

Katie Beckett television acting credits include Redfern Now and The Marshes whilst her stage credits include This Fella, My Memory (Moogahlin Performing Arts); Impossible Plays, Pull My Strings and I Will Play for You, Wrong Skin (Next Wave Festival); Winyaboga and To Soothe a Dying Pillow (Andrea James) and her film credits include Oakie’s Adventure, One More Time and Blackground. She is also a founding member of the Cope St Collective.

ILBIJERRI is Australia’s leading and longest running Aboriginal and Torres Strait Islander Theatre Company, creating challenging and inspiring theatre creatively controlled by Indigenous artists. Our stories are provocative and affecting and give voice to our unique and diverse cultures. Each year the company travels to national, regional and remote locations across Australia and the world.