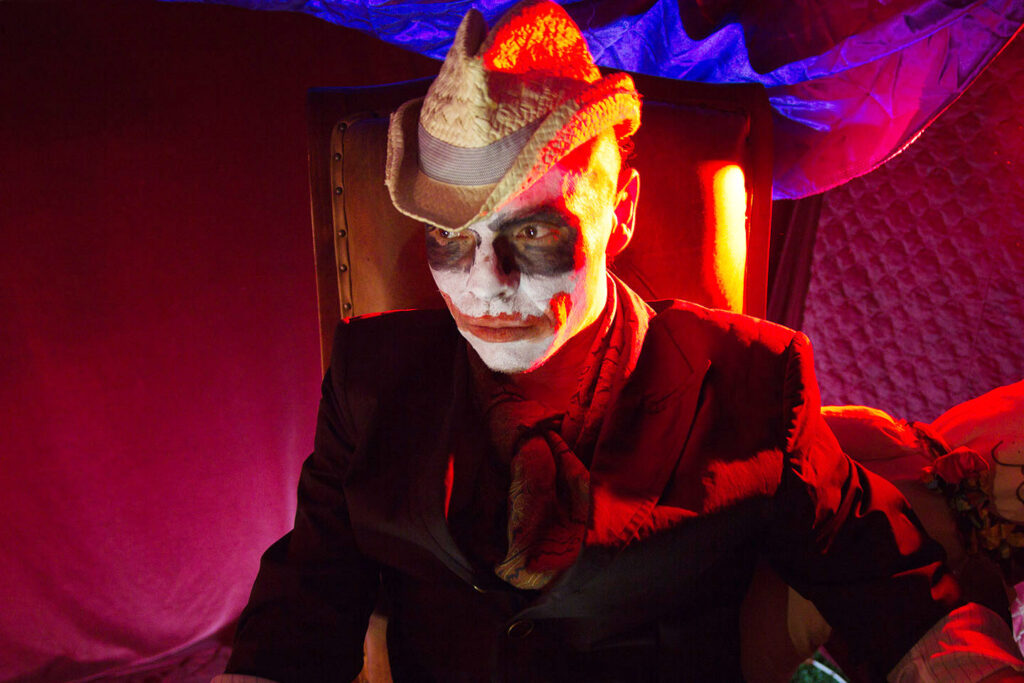 Croatian born artist Marko Maglaic (1972- ) believes his paintings come from a spiritual, logical, yet simultaneously chaotic, place. As an artist he strives to depict fact, myth, life, love, death and the eternal struggle of mankind. For Maglaic the enemy is time, as love or hate are of no consequence with its passing. He demands his art be thoroughly scrutinised by the viewer, to discover the works’ truthful emotions. To act as a kind of raw sub-conscious, opening up new truths and providing evidence of a higher existence.

Maglaic’s art is tribal and graffiti-like. It has drawn comparison with Australian painter David Larwill and the American artist Jean-Michel Basquiat (1960-1988). Like Larwill, Maglaic’s humanoids are angry, sullen and bewildered, yet somehow manage to possess serendipity. Their connection to each other is a kaleidoscope of irrational relationships.

His picture plane is crowded with animated human figures, often mask-faced, arrows, words, phrases, numbers, dogs and urban decay. Likewise with Basquiat, Maglaic creates a dense, rich, glamour-strange mix of graffiti. The images and words lunge at the viewer with striking faces and figures, colour strong and random, yet subtle and convulsively sophisticated.

Historical references to Marko’s Maglaic’s art can be found in the abstract figuration of the late 1940s and 1950s through Paul Klee, Pablo Picasso, Jean Dubuffet, Pierre Alechinsky and Adolph Gottlieb. From this group it is the work and philosophy of Jean Dubuffet (1901-1985), the French pioneer of anti-cultural art, which should be thoroughly examined before evaluating Maglaic’s painting. Dubuffet’s canvases were scribbled and scratched like the surfaces of old walls: ‘to bring all disparaged values into the limelight’.

The French artist was fascinated by the graffiti emblazoned on slum dwellings, which he believed read of personal experience uninfluenced by cultural traditions. He claimed such works were evidence of a power of originality which many people possess, but has been stifled by educational training and social constraints.

British art historian Edward Lucie-Smith described the significance of such painting as: ‘giving a priority to the inner world of the artist and the rejection of the traditional values of art’.

Dubuffet termed it Art Brut: ‘Works executed by people free from artistic culture, for whom mimesis, as opposed to intellectuals, plays little or no part, so that their creations draw up everything from their own depths and not from the stereotypes of classical and modish art. We have here a chemically pure artistic operation, an uncut diamond, re-invented in all its phases by its creator, touched by his impulses only.

In the spirit of Larwill, Basquiat and ultimately Dubuffet, Marko Maglaic’s paintings establish themselves through their unique post-modern beauty, making odd things work with an extraordinary force. He has his own nomadicism covering a kaleidoscope of expressionism and figuration. Maglaic explores the complexities and diversities of modern urban life by embodying his pictures with a jarring psychological strength.