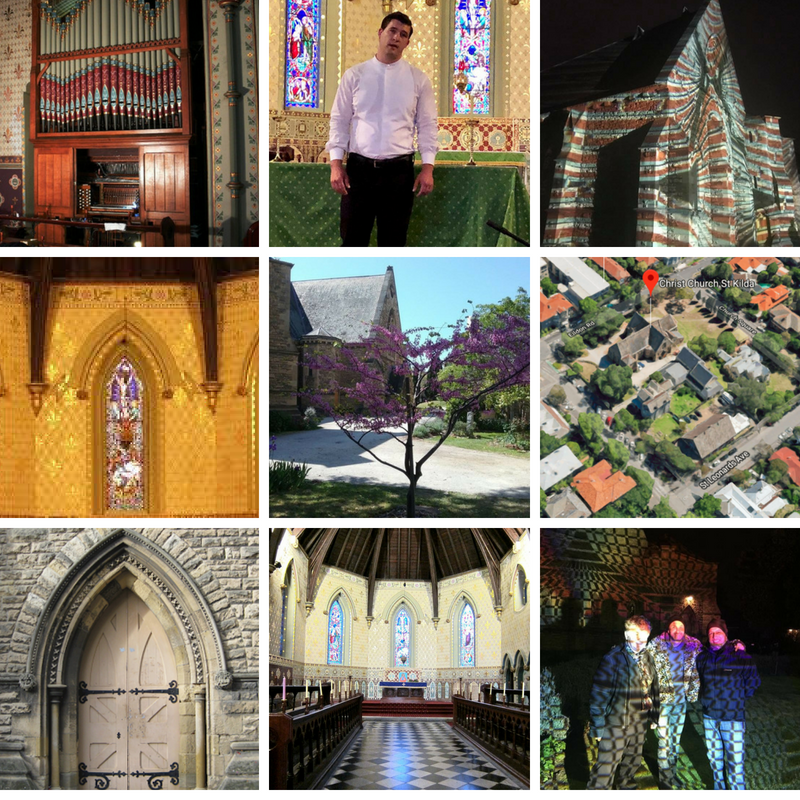 THE HERITAGE SITE & ITS HISTORY

Henry Jennings started it all.  He was the local solicitor.  On 23 December 1849, the first Anglican service was held, as was the example of the early Christian church, in his home in what was then known as Melbourne Terrace (on the corner of what is now Acland Street and Clyde or Fawkner Streets).   On the same day, his wife started a Sunday School with 16 children.  There’s no record of what they did on Christmas Day but on the 30th December, they held another service.

Melbourne received its first Anglican Bishop on 28 January 1848 when Bishop Charles Perry was installed.  The earnestness of Henry Jennings prompted Bishop Perry to arrange for the Reverend H.W.W Liddiard to go to St Kilda on 6 January 1850 and hold the first service before an ordained minister.  There were 30 people there.   Their efforts bore fruit with the services moving to the house of James Moore and the need being established for a church building.

Shortly after, a Crown grant was made of the historic site in Acland Street: approx. 2 acres (0.8 ha) for church, school & clergy housing.

The first building was built of wood but soon replaced by brick.  That brick building was there as part of the schoolroom until that building was razed in 1977.     A publication of the time said:

“The situation granted for it by the Government is that beautiful spot of ground directly in front of the residence of O. Browne Esq, and when completed it will afford a proof, as well of the prosperity of the picturesque village in which it stands as of the Christian liberality of its inhabitants”

A temporary wood & brick church was also built in the early 1850s.

Bishop Perry decided to form a parish at St Kilda and in December 1852 appointed the Reverend David Seddon M.A. as incumbent.    He had been the Vicar of Mottram, Cheshire.  His trip to Melbourne was no joy ride.   The sea journey took 6 months.   The crew mutinied and yellow fever broke out.   When they arrived in Melbourne, the only accommodation for Mr Seddon, his wife, 5 children and 2 cousins was a big room at the Benevolent Asylum in West Melbourne.

The story goes: “On Mr Seddon bidding farewell to his congregation in England, a young man, whose professional training as an architect had been almost completed, said, ‘I shall go out to Australia , and build you a church’ ”   The young man was Charles Swyer, the architect of Christ Church, who came out from England with Mr Seddon.

The Trustees of the Anglican Church were looking for an ample parcel of land, suitable for a church and its expansions.  They applied to the Government for a grant of land in Acland Street which was given.  The grant is dated 20 February 1855.   The site was known as Church Square.   It is a rare and significant square in the history of town planning in Victoria, demonstrating the importance of the church in the community.

Building of the church commenced earlier with the foundation stone laid on November 29, 1854.   Money was obtained by subscriptions.   Charles Swyer had formed the partnership of Purchas and Swyer with his brother in law Albert Purchas although it is understood that Purchas played no part in drawing up the plans for Christ Church.  The original plan was for a nave, two transepts and a chancel but the subscriptions must not have been sufficient for the chancel to be built at that stage.

The stone for the church was shipped from Point King near Sorrento.    Captain Richard Leggett was well known in the Melbourne Queenscliff run for 18 years before the advent of steamers.  He and his brother were responsible for landing all the stone on a small pier at the Esplanade.   Swyer went to the beach one night and “saw about two cart loads of stone sitting on the ground above high water, and a quantity of stone was left in the punt” but the next morning “no stone had been carted up to the church ……but the stone on the beach was gone and the punt sunk with the stone in it”.   The contract was cancelled.    Swyer also had problems with the masonry contractor, Charles Balding, particularly for quarrying on the church reserve for rubble stone for backing.  He had disputes with carpenters and joiners also.

An article in the Melbourne Herald on 11 August 1857 described Christ Church as “a very handsome and substantial structure in the early English style, consisting of nave, north and south transepts, chancel, vestry porches, and stone turret stair cases for the galleries.  Its extreme length is 111 feet, width 32 feet, height to the ridge of the roof 50 feet.”

The stone was the subject of some controversy.  The Melbourne Herald said the church was “…built with a close-grained sandstone of a warm buff tint, procured from Point Nepean, and, contrary to popular belief, has stood the test of exposure very well; a few bad stones which were accidentally used have been removed; and it is found that the stone possesses the property of hardening by exposure to the atmosphere; no anxiety therefore need be felt as to the lasting quality of the material”.   This has been the subject of debate since.

It took 3 years to build.   The doors opened for divine service on Sunday August 2nd 1857.  Three services were held that day.

It wouldn’t have looked as it does today.    The pulpit was in the middle of the church.  The font was below the pulpit.  The organ was at the back of the church on a raised platform where the west gallery now stands.

And it did not have the sanctuary we see today.

In December 1874, alterations and additions were made.    The plans were prepared by Sydney Smith, the city surveyor of St Kilda who was an enthusiastic worker for Christ Church.    Swyer had moved to New Zealand.   The chancel was extended 47 feet.  The vestry room was created.   The extensions cost 1,500 pounds.   The contractor was a resident of St Kilda, David Flatman.   In 1881, it was decided to build a new chancel and to replace the tile floor of the nave of the church with a wooden floor.   The organ and choir seats were moved to the chancel and some outside changes made.  Sydney Smith managed the changes which cost 250 pounds.  It is believed this was when the chancel was decorated with gold fleur de lys.

In ???, the Reverend J Stanley Low became Vicar.  He had come to Victoria for his health.   He was Vicar for 36 years.  Before taking on the role, he set out one day to walk to St Kilda with a friend from his accommodation in Lonsdale Street in the city of Melbourne.    He crossed the Yarra at the present site of the Botanical Gardens but became bushed.   After wandering he arrived in the village of Prahran and was put on the right track to St Kilda which then consisted of a few scattered houses towards the sea frontage with 2 or 3 of those dwellings built on the Esplanade.  This experience also reflects the experience of Henry Jennings’ youngest daughter Henrietta who talked about the expanse of bushland between St Kilda and Melbourne and the number of aboriginals camped in the rough country.

The church organ was built by William Hill of London, shipped out to Australia & first

played on 29 January 1860.  It was modified in 1874 by Geo. Fincham and largely rebuilt in 1913-6.   A more thorough rebuild, with new stops, was undertaken from 2000 to 2014 to put it into its current pristine condition including restoring the stencilling on the pipes.  The reconditioned organ was rededicated by Archbishop Phillip Freier in 2008.-

At the same time as the church was being built, the first vicarage was being built on corner of St Leonards Avenue & Church Square.  It took from 1853 to 1855 to complete it under the supervision of Swyer.   Additions were made in 1859.  Further additions and repairs were made in 1864, this time under the supervision of Purchas due to Swyer having moved to New Zealand.   Repairs were again needed in 1872.

The story goes that a daughter of the then Vicar died of TB in the 1870s, and prompted by the heartbreak and by fear of endemic damp it was decided to build another vicarage – the current Vicar’s house – next to the church, and close to Acland Street.   The first vicarage has since been used as a school, a community health centre and a private residence.  From 1986 to 2006 it was occupied by the Bishop of the Southern Region.

It was in 1872 that the decision to build the current vicarage was made.   “……..a new Parsonage should be built in a plain, substantial manner, suitable for the accommodation of the family”.  Tenders were called in 1884 and it was completed in ????.

Into the 21st century

In 1890, the site boasted the Church, the school house, the 1850s parsonage (transformed into a private residence) and the 1884 vicarage.

Until the 2000s, the only additional building was the Church Hall built in 1914.   It cost 2754 pounds of which 2700 was borrowed.   It was designed by Richardson and Wood architects and built by F J Fair.   Among groups using the hall in its early days was the Jewish Red Cross Fund for Polish relief.

Why are the buildings and land significant?

The people who made it

Henry was born in 1805 and arrived in Hobart in 1824 and returned to England in 1826, only to come back on the same ship arriving back in 1827.  He was married in 1830 and he and his wife Alicia had 11 children.  Henry was a solicitor, admitted to practise in NSW on St Michael’s day (September 29th) 1827 and admitted to the bar in Tasmania in 1831.  He was known as “The First Solicitor of Van Diemen’s Land”   He moved to Melbourne in 1849 and started a law practice in Queens Street, Melbourne.

He is shown as “one of the first vestrymen“ of Christ Church St Kilda.  Records show he died in 1885 at his residence knows as Crag-y-don in Acland Street St Kilda.

Although he had 11 children only 1 boy survived, only 3 married and they had only 2 children.

St Kilda through the years

When Henry Jennings settled in St Kilda in 1849, there was an expanse of bushland between St Kilda and Melbourne.   Aborigines were camped there.    The gold rush in the 1850s saw St Kilda develop as a seaside holiday location for those who could afford it.  Evidence of this remains in substantial houses of the period.

The years since have not been as generous as the suburb has declined while always remaining a focus for Melbourne.    The decline of St Kilda as an affluent suburb is said to have started around 1890.