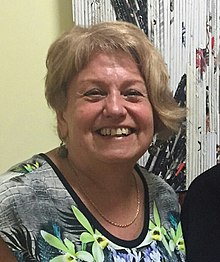 Carmen Ibis Novoa is an artist, painter, and award winning writer and poet from Uruguay. Carmen was born in El Cerro, a suburb of Montevideo and immigrated to Melbourne in 1978 where she currently resides. Carmen has made important contributions to raising the profile of Spanish and Latin American art in Melbourne, including organizing an exhibition in Parliament House, and an exhibition at the Wyndham that was officially opened by Former Prime Minister Julia Gillard. Carmen has been featured in Spanish national newspapers as well as in Uruguay highlighting her art Exhibitions and literary works. Carmen’s own work is a style of urban art that incorporates recycling. Her works are made using hundreds of magazine sheets to create geometric patterns that enhance value and expressive force in colour and lines.