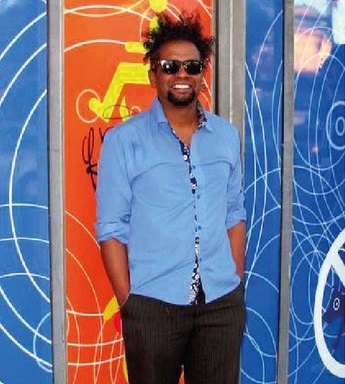 Victor Holder is a multidisciplinary artist with a background in visual arts, film and motion graphics animation. He has been involved in environmental and social actions and movements, through which he developed a sensitivity to and fascination with the intimate connection between human beings and their natural and built environments, as well as with each other, and how this interconnectedness evolves in a constant dynamic of energetic exchange. These interests have also evolved into a strong sense of responsibility for his own contribution to this web. His work as an artist is interconnected with his social and environmental work, and as such his artworks often reflect themes of social and environmental responsibility.

“My traditional home is at Undoolya which is part of Alice Springs. We won Native Title in 2000, we are part of the Arrernte Nation. I am also part of the Amjatere Nation. My family consisted of four children with one deceased and eight grandchildren as well as three great-grandchildren.
I have been painting for 14 years and my education background is Batchelor of Arts, Associate Diploma in Business Management and Certificate One Tourism. I have lectured in Art, Aboriginal Cross Culture Courses at IAD as well as Aboriginal Cross Culture, History of Central Australia at Remote Health in Alice Springs for Flinders University.
My art also consists of painting logos for Nationals meetings in Alice Springs as well as coordinating painting 30 bin containers for the local town council with the rational owners of Alice Springs. Which we won Territory Tidy town 2007.
I have had a couple of art exhibitions: Reconciliation in Brisbane Hospital 2011, Tandanya Aboriginal Art Gallery in Adelaide 2012. My artwork is sold today in a Glenelg Art Gallery in the Stanford Grand at Glenelg, SA.”

Artist and Nature lover Mother Nature has always connected with me. Oceans, forests, rivers, mountains and beaches are my favourite playgrounds – full of natural beauty , wildlife and adventure. Surfing our beautiful Australian coastline over the last 45 years has heightened my connection with nature and driven my desire to express it through my art. The simple pleasures and special moments that we get from this amazing world should be celebrated. For me art provides a great way to do this. Beyond the celebration lies the awareness artistic expression can generate. Awareness of our planet ,it’s natural beauty and the responsibility we all have to protect it from those who choose to sacrifice it for short-term financial gain.

Carmen Ibis Novoa is an artist, painter, and award-winning writer and poet from Uruguay. Carmen was born in El Cerro, a suburb of Montevideo and immigrated to Melbourne in 1978 where she currently resides. Carmen has made important contributions to raising the profile of Spanish and Latin American art in Melbourne, including organizing an exhibition in Parliament House, and an exhibition at the Wyndham that was officially opened by Former Prime Minister Julia Gillard. Carmen has been featured in Spanish national newspapers as well as in Uruguay highlighting her art Exhibitions and literary works. Carmen’s own work is a style of urban art that incorporates recycling. Her works are made using hundreds of magazine sheets to create geometric patterns that enhance value and expressive force in colour and lines.

Susana Rivas was born in El Salvador and migrated to Australia at the age of 14. Her art explores her Salvadoran cultural heritage within an Australian context, including critiquing social, political and environmental issues in both societies. Using the mediums of photography, drawing, collage and pyrography (the art of burning wood with specialised tools), her work explores her own identity, her connection to Indigenous cultures, human relationships with nature and human impact on the environment. Her approach is experimental and exploratory, giving a three-dimensional characteristic to her photographic style. Her work has been part of a number of group exhibitions in New South Wales and Melbourne and has also been featured in the Hispanic channel Antena Hispana. She is currently completing the final year of her BFA in Fine Art Photography at RMIT University.

“In Central America, independence was first called for in 1811 and achieved in 1821, but our resilient indigenous cultures of El Salvador have yet to declare their own true Independence” S.R

“Smell of Freedom conveys the hope of a nation that has a history of war and
violence. El Salvador is known for its hard-working people and their constant
struggle for justice. It is up to us to build a better nation and preserve our indigenous cultures”. S.R

Sarah de la Cerda is an Ecuadorian artist whose work has been influenced by the places she has lived including, Ecuador, Australia and India. Sara began painting at a young age under her mother’s influence. As an adolescent, she began working with acrylics and later she fell in love with oils, and as part of a deep process of exploring her inner world through art, she even began experimenting with the incorporation of menstrual blood into her work. This experimentation was part of an exploratory process that included a desire to rediscover the ancient art of women’s business.

Fabiola Campbell, (aka Fabi Ola) is an Australian-Venezuelan artist. She was born in Melbourne, grew up with her parents and five siblings in the Andes Mountains of Merida, Venezuela, and has lived in Melbourne for the past 13 years. Fabiola was immersed in arts and crafts from a young age, joining the women of her family in embroidering, ceramics, pottering and painting. A number of life changing events saw Fabi’s work evolve into painting, which she used as an outlet for channelling her emotions. She has used fluid acrylic techniques such as dirt pouring, swiping and puddle pouring to create the work in this collection. She dedicates this work to the strong and supportive women whose friendships have inspired

Flavia Julius is a Brazilian artist who was born in Sao Paolo. Before moving to Sydney to join her Australian husband, Flavia worked in Brazil in advertising and journalism, specialising in travel writing. In 2014 she decided to dedicate herself to her long-term interest in painting. In Australia, Flavia developed a fascination with Australian indigenous art, which brought about a dramatic shift in her style of painting, which now incorporates dot painting techniques. Themes that inspire her paintings include music, nature, dancing, celebrations, journeys, cities, festivals, diversity, human rights, people, carnival, and extravagant energy.

Open during the Crawl

4Dverse Gallery and Vegilicious restaurant will be participating in the St Kilda Art Crawl 25-27 May, showcasing a diverse range of art from different backgrounds locally and internationally, Look out for maps in St Kilda venues now. Get some delicious snacks or drink downstairs or dinner and come early or late at night. 🙂

The focus of 4DVERSE is to connect socially and culturally diverse people through a thriving community of arts, well-being and cultural programs.

Our multi-functional gallery space has been home to many exhibitions, workshops, lectures, performances, launches, markets, screenings and much more. We are always looking for creative projects and collaborators.